A Richard Taunton student has been awarded a prize in a poetry competition commemorating the Tudor diver Jacques Francis.

Jasmine Crook, formerly of Redbridge Community School, studies English Literature, Photography, and Digital Media at the college. She was awarded £100 for her poem which was praised for giving a voice to Jacques Francis. The prize winning ceremony took place on Monday 5 July at Sea City Museum in Southampton. 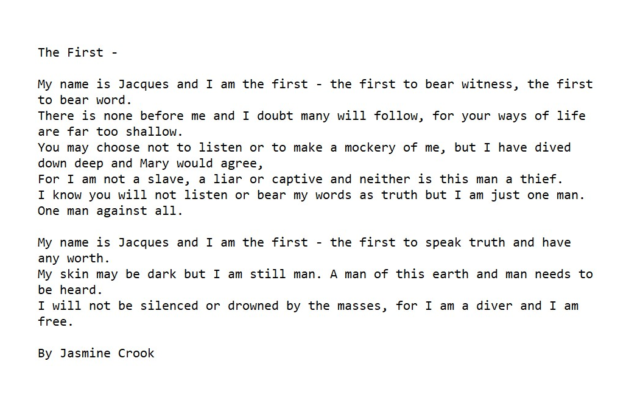 The entire English Literature class at Richard Taunton Sixth Form College submitted their writing to the competition. Students received feedback from a panel of five judges, including a History lecturer from the University of Southampton, a local poet, and the Black History Month coordinators. Other entries highly commended by the judges were written by Nathan Clifford (formerly of Hounsdown School) and Dantay Tollerton (formerly of Redbridge Community School).

Caroline Rand, acting Head of English at the college, said:

‘This was a really interesting and inspiring competition that led to us gaining knowledge of Jacques Francis who really was an incredible man and worthy of further understanding. The students learned his history and then attempted to write about him or from his perspective. The result was a fantastic collection of entries of which they should all be proud.’

The prize giving was featured on BBC South News on Tuesday 13 July and Jasmine’s winning poem will be published in a forthcoming book at a ceremony at Sea City Museum.