On Thursday the 23rd of January, Martine Harding – a final year student at Richard Taunton – travelled to London to deliver the petition ‘Don’t Shut Disabled People Out of Mainstream Education’ to the Prime Minister.

The visit to 10 Downing Street was part of ALLFIE’s Day of Action and the charity’s petition garnered over 100,000 signatures. It calls on the government to increase funding and support for inclusive education.

Joining the group to deliver the petition were Marsha de Cordova, Member of Parliament for Battersea and Shadow Minister for Disabled People, and Hilra Vinha, Learning Support Coordinator at Richard Taunton.

“Delivering the petition to Number 10 was amazing because I want to be a politician one day. I would’ve been lost without the support I’ve had at Richard Taunton, and the research I’ve done with Hilra is what inspired me to pursue further education. I’ve now got three offers to study Politics at university.

Later in the day, Martine and Hilra visited the Supreme Court for the launch of a report entitled ‘Accessibility Plans as Effective Tools for Inclusion in Schools: Are They Working?’. Both Martine and Hilra contributed to the research that generated the report.

Of the launch event, Hilra said:

“Martine spoke openly about her schooling experiences to an attentively impressed and moved audience. Her personal struggles as a person with a disability, as well as someone who identifies as gender-fluid and an outspoken member of the LGBTQ+ community, resonated with the experiences of many disabled people in the room.”

According to the report, a number of mainstream schools are not meeting the legal requirement to promote and provide inclusive education. To read the full research report and to learn more about the Alliance for Inclusive Education please visit www.allfie.org.uk. 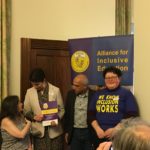 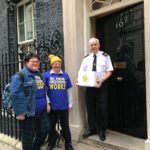